Why Your Copper Sink May Outlive You—and Your Grandchildren

The most astounding thing about copper? It’s essentially ageless. In some cases, you can scarcely tell old copper from new copper. So, while stone sinks from the 18th and 19th centuries most certainly show their age and early sinks made of zinc and cast iron have since corroded or rusted, even the oldest of copper sinks are Benjamin Button-like in appearance. Additionally, copper actually grows better with age and the more it is used the faster it will re-patina. (Most marks left in sinks by acidic substances will re-patina naturally within a few days.) Copper’s self-healing capacities are well-documented, as are its antimicrobial properties. Are you starting to understand why we sometimes can’t help but proclaim copper “magic”?

How Long Has Copper Been Used in the Bathroom? Copper has forever been entwined with the history of plumbing—and the history of man, for that matter. The earliest copper artifact—a copper pendant discovered in northern Iraq—has dated to approximately 8,700 B.C. For the first five millennia copper was the only metal known to man. As it relates to plumbing, archaeologists have discovered copper water pipes in India that date back as far as 4,000 to 3,000 B.C. Egyptians reportedly used copper pipes inside the pyramids to power elaborate bathrooms, as well as irrigation and sewage systems. (Many thousands of years later, in the 1960s, copper pipes became the most commonly used for plumbing.) Even prior to the advent of indoor plumbing, some primitive dry sinks included copper liners—some removable. There is a good deal of written history on the subject of copper bathtubs. These tubs were once a mark of the aristocracy. We still think a copper tub has a natural air of grandeur. Supposedly, Benjamin Franklin imported the first bathtub to America in the 1700s—it was made of copper. Ben liked to read and write while soaking in his copper tub. Though these early tubs were filled by hand, copper naturally retained the water’s warmth so that baths didn’t grow cold prematurely.

Copper tubs and copper dry sinks became more common throughout the 19th century. Entire families used these tubs before a pot-bellied stove or kitchen fire. And when the water closet, first developed in England, began appearing in American homes, with it came copper pans, several inches deep, for washing up. These sinks evolved along with indoor plumbing and were widely used in many forms—even in some early railroad cars. 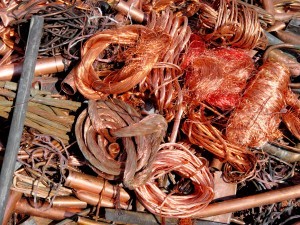 Copper scraps about to be melted down and recycled into a copper sink.

Copper Can Be Recycled Again …. And Again, Without Losing Its Quality

All of our copper products are made from 100 percent recycled copper that has been melted down and hammered out. (Watch the process.) More so than any other engineering metal, copper has the highest recycling rate. Best of all, the copper already mined since 1900 amounts to 550 million tons. Two-thirds are estimated to still be in use.
“This enormous stock of copper, contained in its diverse range of end uses and equivalent to around 20 to 25 years of mine production, is often referred to as society’s “urban mine,” reports the International Copper Association (Copper Alliance). “Copper is one of the few materials that can be recycled repeatedly without any loss of performance. As well as helping to satisfy the annual demand for copper, recycling conserves valuable natural resources saves energy and reduces CO2 emissions.” In this disposable age, there is great value in this kind of sustainability. 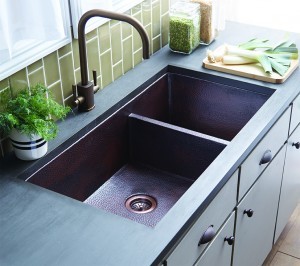 After reading this, you can see why we so confidently extend a lifetime warranty on all of our copper sinks. We also use the words “heirloom sink” proudly. A copper sink will truly last for generations. When most people talk about leaving a lasting legacy, they probably aren’t thinking about leaving behind a copper sink. But we’re willing to bet that your copper sink will live more lifetimes than you, and maybe even your grandchildren. Since our sinks are all made of recycled copper, they have all already served at least one other purpose previously. This magical metal never dies. Copper products have a naturally antique quality. Because copper goods have been around for ages and is incredibly resilient and strong, a copper sink introduces instant character and patina to any space. It complements a range of homes —from American farmhouse to French country, from rustic cabin and lodge décor to industrial spaces where hammered metals are in harmony with so many utilitarian materials. The copper vessel sinks and copper farmhouse sinks speak most strongly to the copper sink’s origins. However, the modern copper trough sink is perhaps the most reminiscent of those first primitive copper pans. Whichever copper sink you choose, you will invoke the past and gain a product with a (very) long future.