The History of Trough Sinks

This isn’t your grandma’s trough sink. The trough sinks of today have been made over so as to be nearly unrecognizable. Transformed from rustic, functional feed troughs into darlings of the design world. The trough trend speaks to a desire to take the old and make it new again with a single focal point bathroom sink that’s big enough to share.
The revival of trough sinks has us wondering: How did troughs morph from this … When designing concrete trough sinks, The NativeStone® Trough 4819, Trough 3619, and copper trough collection, we revisited the kitchen and bath spaces of yesterday to unearth their hidden history. Today’s trough sink is perhaps most at home in modern industrial-inspired bathrooms. However, its origins lie in rural kitchens and early communal bathrooms, at a time when indoor plumbing came about. In fact, the trough sink’s history is largely the history of all sinks.

In the pre-plumbing era, homeowners used simple dry sinks. Usually, crude shallow trough made of metal, wood, or carved stone and lined with zinc or lead. By depth and width, these sinks were similar to the farm animal troughs found outside. Stone sinks sometimes called “slopstones”, in particular, could be found in old English countryside cottages. There they assist in everything from preserving meat to washing up.

The drain and faucet sink, as we know it today, made its entry in larger cities in the 1850s. In remote areas well after 1900 during a process that stretched over more than a century. Its arrival coincided with Louis Pasteur’s 1860s studies of the perils of bacteria. Soon, existing dry sinks changed to accommodate indoor plumbing. This turned the trough sink into a workhorse used in the first communal bathrooms. 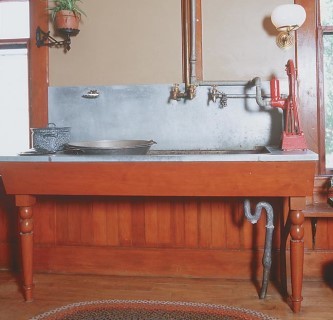 The Industrial Revolution saw to it that plumbing fixtures in affluent homes grew more decorative and the kitchen sink spun off in all new design directions. However, the trough sink became largely relegated to the bath space and was the style for communal bath spaces. This included hospitals, stadiums, dormitories, and schools. In this way the trough sink inherited its utilitarian reputation. It traveled from field to farmhouse kitchen to humble wash-up station to the kitchen and bath spaces of today.

Prior to its reentry onto the contemporary sink scene, the trough sinks found in modern homes took on a decidedly “period” look. Most that you see were true antiques, primarily made of rough-hewn stone, cast iron, or porcelain with an integrated backsplash through which a faucet (or two) was mounted. Many were hefty stand-alone appliances, as—in their day—these sinks were not yet integrated with countertops. These early trough sinks, with their focus on function and comfort, gave way to the first apron-front or farmhouse sinks. Today’s trough sinks are generally sleeker than yesterday’s, skewing toward minimalist (unless the intention is to create a rustic bathroom, as was the case with the sink below, repurposed from an actual cattle trough). A rethinking of the popular double vanity, the trough sink remains a friendly bathroom sink, with taps placed comfortably apart so that coworkers or family members can tidy up side by side. As for the Native Trails trough sinks from our NativeStone Collection of sustainable concrete sinks, we designed them to be strong and silky to the touch but much lighter than ordinary concrete sinks so that they’re not going to throw anyone’s back out during installation. 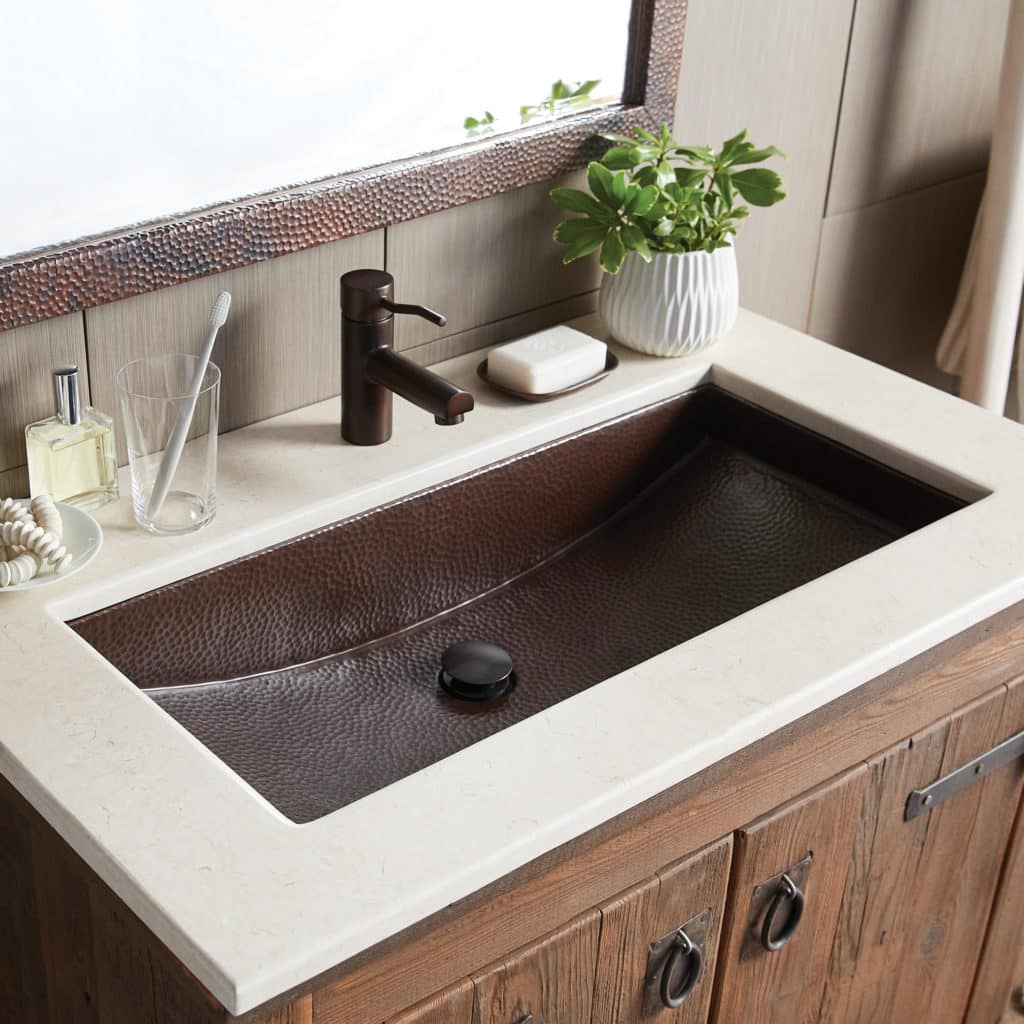 Our copper trough sinks come vary in size from 30” to 48”. They’re artisan crafted from recycled copper hammered many thousands of times over several days. As with all the trough sinks that came before them, they’re made to be incredibly durable—both in function and in public sentiment.
Now that you’ve brushed up on your history, check out these five reasons why a trough sink might be right for your bathroom!
You can also browse our full collection of Native Trails Trough Sinks, or visit your local showroom to see them in person!