The History of the Lazy Susan In January 2010, an unassuming mahogany lazy susan dating back to circa 1780 went to the highest bidder at Christie’s London auction house for $3,900. The item serves as one of the earliest known examples of a lazy susan turntable. But who was Susan? And was she really that lazy? We ask because, following its 1950s and ’60s heyday, the lazy susan is back in a big way. In 2012, we commissioned artisans to craft a copper lazy susan for our decor line. Its popularity soon called for the roll-out of additional sizes and materials.

Sarah Coffin, head of product design and decorative arts at the Cooper-Hewitt National Design Museum in New York told the Los Angeles Times that the origin of the lazy susan turntable is “a great mystery.”

“I’m pretty sure the name is a 20th-century invention,” said Coffin. “But the earliest forms I know of are from the 1720s and 1730s England. Many were pedestal tables with rotating tops used for wine and tea tasting. I’ve also seen versions with silver trays fitted into the tabletop.”

There are quite a few folk etymologies that attempt to explain how the lazy susan came by its name. Here are a few of them: Many people claim that Thomas Jefferson invented it (or at least popularized it in America). He brought the concept of the “dumb waiter” to Monticello following a trip to France. Jefferson’s dumb (or silent) waiters were serving trays with wheels. A guest who dined at the President’s house recalled, “By each individual was placed a dumbwaiter, containing everything necessary for the progress of dinner from beginning to end.” Today, some call the lazy susan a dumbwaiter (especially in Britain). It serves many of the same purposes and is a spin-off of this functional piece of furniture. Others attributed the name to another Thomas: Edison. After all, he was the mastermind behind the phonograph, introduced in 1877, and its spinning turntable.

Regardless of who thought to spin the plates, the term “lazy susan” debuted in the press in the early 20th-century. In The Boston Journal in 1903, Scottish carpenter John B. Laurie became the “resuscitator of ‘lazy susan.’” A piece said, “‘Lazy Susan’ is a step toward solving the ever-vexing servant problem. She can be seen, but not heard, nor can she hear, she simply minds her business and carries out your orders in a jiffy.” In 1912, The Christian Science Monitor referred to the lazy susan as “the characteristic feature of the self-serving dinner table,” and a 1917 Vanity Fair ad depicted Ovington’s $8.50 mahogany “Revolving Server or Lazy Susan.” Proclaimed the ad: “$8.50 seems an impossibly low wage for a good servant; and yet here you are Lazy Susan, the cleverest waitress in the world, at your service!” Keep in mind that WWI was in progress in 1917, and women sought solutions to a shortage of servants.

Webster’s Dictionary added the term in 1933. While the identity of the original Susan remains a mystery, her namesake lives on. We conclude that her roots are in Europe while she came by her name in America, where she has gone in and out of style. 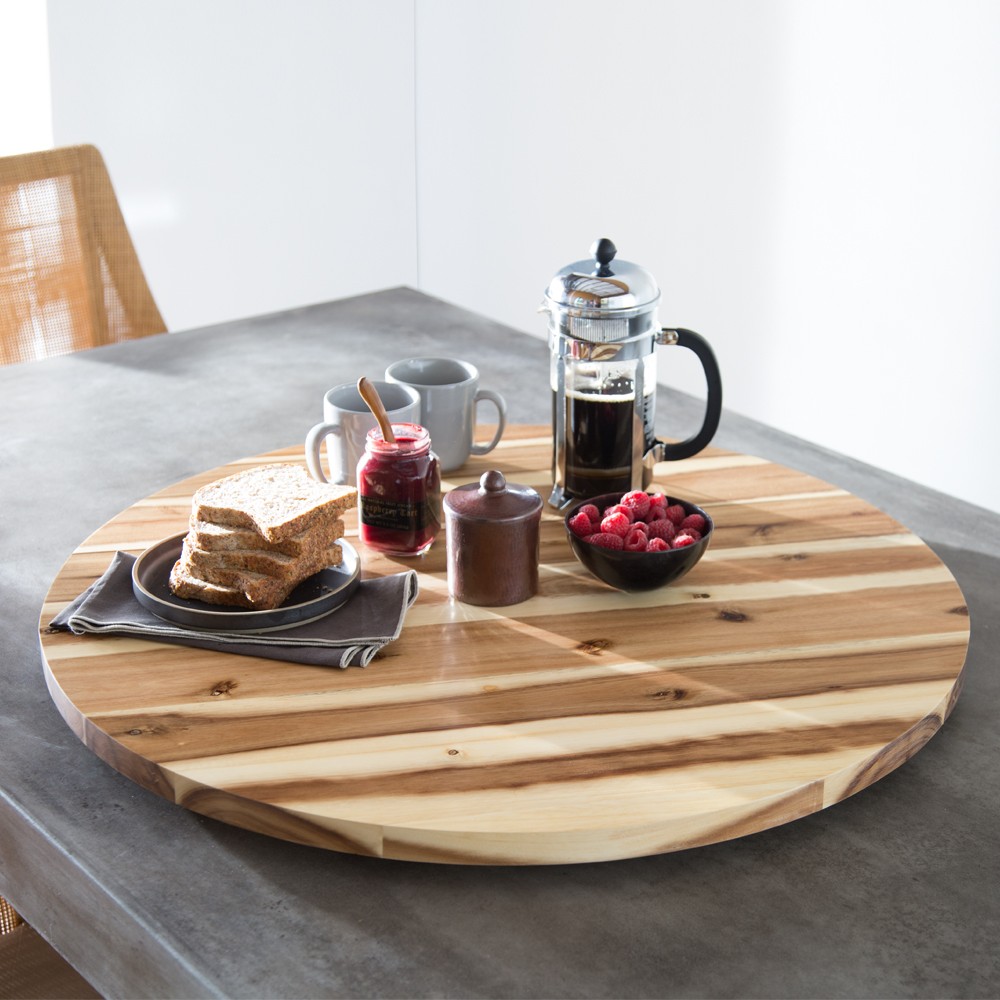 By 1918 Century Magazine had already dismissed the lazy susan as out of fashion, though she would become very popular again in the 1950s, after George Hall, a soy sauce manufacturer, and partner in popular San Francisco-area Chinese restaurants, reintroduced the tabletop turntables in his restaurants. At the same time, the domestic service sector collapsed and the post-war Baby Boom led for to a demand for convenience. Lazy Susans became so fashionable in the 1950s and ’60s that they were deemed kitschy in the decades to follow, but the 21st century has seen them reinvented and in demand once more.

Today, this turntable has multiple uses , far beyond its early purpose as a servant replacement. It is the new centerpiece of the modern dining table—as functional as ever but having undergone a high-end makeover that has designers and homeowners, and those that gather around their tables, clamoring to take them for a spin.