The Copper Bathtub in History

The copper bathtub is a classic fixture in art, literature, and the lives of the rich and famous. From the great Impressionist artists and hot list writers to the nobility and aristocracy of eras past, it has been and continues to be an icon.

Woman in a Bath Sponging her Leg by Edgar Degas

In one of Edgar Degas’ paintings, a woman sponges her leg, propped and arched on the side of a bathtub. The copper tub appears in several of Degas’ works, many of which feature Parisian women grooming themselves—reaching to towel the back of a neck or to run a comb through long hair. Women in the bathtub were an especially beloved subject. He portrayed them immersed, as well as climbing in and out of the tub. Both the lovely angles and the purely honest ones. These women were all bellies, breasts, hips and turned away faces. Their stooped postures spoke to their profession as laundresses weary from long days. 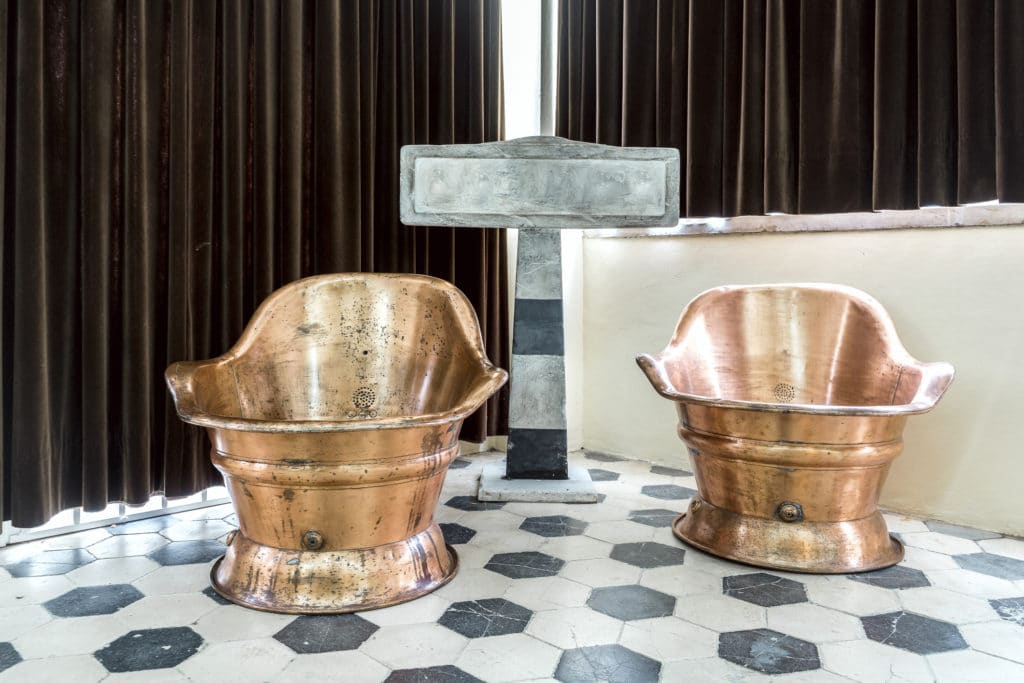 They show themselves in Degas’ work and in novels both new and old. In Sue Monk Kidd’s latest, The Invention of Wings, the slave who is at the center of the story steals away to sneak a soak in her mistresses’ copper bathtub. And in Hottentot Venus, a novel by Barbara Chase-Riboud set in 1815, a bath is prepared by a governess.

“Alice would stay until two o’clock to prepare my daily bath in the huge French copper bathtub that sat in the corner of the bedroom. … The copper tub gleamed in the oil lamp’s glow, lit early in the seal gray of a winter’s afternoon. Steam lifted from its sweating sides and rose like the Cape mists. Alice poured buckets of hot water into it, filling it almost to the top.”

In fiction today, you can find references in the pages of historical romance novels. It has come to symbolize escape, luxury, and sensuality. Interestingly, in 1952, Salvador Dali paid 110,500 francs for a giant, ornate bathtub used by King Edward VII in a Parisian brothel. He visited this brothel so frequently, and so enthusiastically, they gave him his own bathtub and his own room. 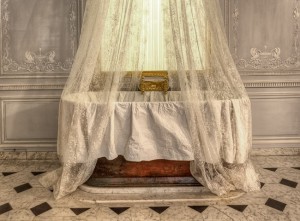 Over the years, they have beautifully withstood the test of time and of trends that come and go. They were the choice of many mid 18th-century French monarchs, who had the tubs rolled into their rooms on casters and filled by servants with water that was heated over an open flame. Today, it retains its place in the palatial homes of the wealthy. Across cultures and time periods, kings, queens, aristocrats, and emperors have chosen to bathe in luxury. Benjamin Franklin famously enjoyed taking a dip in his copper slipper tub; Marie Antoinette and Napoleon Bonaparte, too, were fans of bathing in copper soaking tubs. In time, it found its way into less outrageously appointed homes. According to Old House Journal, “Before indoor plumbing, bathtubs—like chamber pots and washbowls—were moveable accessories: large but relatively light containers that bathers pulled out of storage for temporary use. The typical mid-19th-century bathtub was a product of the tinsmith’s craft, a shell of sheet copper or zinc.”
Having survived the switch from portable to fixed tubs, these bathtubs were often enclosed in wood or used as a liner for steel tubs that stood on iron legs, in the first part of the 20th century. When glazed ceramic and cast iron tubs came into vogue, the copper bathtub was elevated once more to a luxury item, a statement piece in a home or hotel. The Tradition and Craft

Today’s artisan copper bathtubs pay homage to the European heritage and tell the story of generations of Mexican artisanship. Among the oldest trades in Mexico, coppersmithing dates back to the 1500s. Master coppersmiths, through thousands of hammer strikes, reflect centuries of techniques that have been passed down and refined through their craft.
It’s a history that makes today’s copper bathtub as at home in a rustic ski lodge as it is in a contemporary master bath. By offering copper bathtubs in a brushed nickel finish, their versatility has expanded —and added another, particularly bright chapter to a history of long, lazy soaks in tubs that, quite naturally, make bathers feel like royalty. For more bathtime fun, read the Ode to a Bathtub and the stories behind familiar kitchen & bath idioms.